This magnificent lottery is known as Loteria de Navidad (Spanish Christmas Lottery) and has attracted more than 28 million players from Spain and other countries! 1 in 3 players wins a prize!

The Lotería de Navidad is the second longest consecutive running lotto game in the world!

What They Say In The News About Loteria de Navidad

Each year the Spanish Christmas Lottery is the focus of the press and newspapers. The whole month everybody is talking about the lottery, expecting the drawing and translates it on all TV channels live.

According to statistics, almost 98% of the adult population annually watch the broadcast and watch all the news about the game.

National Hall in Madrid holds a great show of drawing, students of the local college sing about winning numbers, thereby declaring the number of winners.

This event lasts an average of 3 hours while the lottery has not been completed and will be called the number of the winning number.

Did You Know These Interesting Facts?

In the Spanish Christmas Lottery there are 100,000 wooden balls, which are drawn in the main prize. Each ball weighs 3 grams and is 19 mm in diameter. 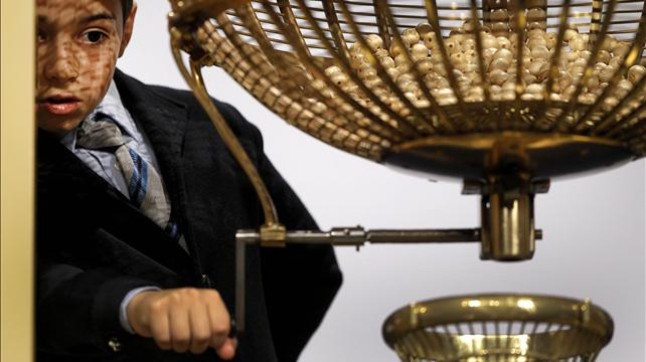 Each ball weighs 3 grams and is 19 mm in diameter

Find Out Information About Winning The Jackpot

In Spain Lottery Lotería de Navidad has another official name – is the El Gordo Lottery.

The history of this game starts with 1812, already has almost 200 years of interesting and exciting game for Christmas.

Raffle prizes Lotería de Navidad is one of the highest in the world lottery prize amount can be up to 2.25 billion Euros per draw.

The odds in this game is very attractive, because there is no single jackpot, there are other secondary prizes.

In Lotería de Navidad, there are about 27 million different ways to win from 20 Euros or get the top jackpot of several million.

The Rules of Lotería de Navidad

For the popularity of the game and to attract a large number of players each ticket issued in 160 copies.

If the player can’t afford to purchase a ticket (for its significant wild value), then each ticket divided into 10 parts.

Just imagine how many tickets and get opportunities to win on December 22.

This gives a total of more than 160 million tickets Lotería de Navidad.

The number of tickets and their prices and some of the rules may vary; it depends on the economy and the importance of the total lottery gaming year.

How to Win In The Lotería de Navidad?

Winning chances in the lottery is not very bad, considering that in addition to huge prizes there are several secondary.

Is there such a bad thing if it is higher than the odds in American lottery to 1,160 times.

Such relativity is still the option and will cancel in Lottery every year millions of players from all over the world.

Each player can buy ten pieces of one ticket, in which case it could be a contender for the top prize of € 4 million.

During Christmas, many people hope to win, as the survey is important for their game play and universal event lottery jackpot wins than fact.

Every year, nearly 98% of the adult population in Spain is taking part in the draw Lotería de Navidad.

This is not just a local or a global game; it’s an annual tradition and a way to become part of something common.

The number of tickets for the Spanish Christmas Lottery is limited each year, but more than 100 000 people have time to get them.